Declaration of Co-dependence: You might as well face it–you’re addicted through love
October 26, 2006 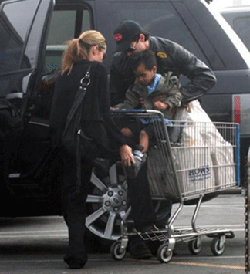 I love my local grocery store. See, I love to eat. When I don’t eat, I feel like I’m missing something. The grocery store is full of things I can eat. Mine is open 24 hours a day. It’s about ten blocks away and I can drive to it in my reliable car, which I also love.

I’ve always lived around grocery stores. Even on my back-to-the-land commune in rural Tennessee we had a grocery store. We farmed too. I remember when I first arrived on the commune by Greyhound bus at five o’clock one magical morning, I took a walk through the fields of kale and said, “Yes, a farmer I shall be.” But no, a farmer I did not become, in part because there was this grocery store, and it provided food so reliably, and farming is so much more work. Late in my commune career I did become the food purchaser for the grocery store, buying bulk food for the commune’s 1500 members from food wholesalers, which were also reliable and fantastically wonderful with their enormous boxes of things I could eat.

I’ll confess, I’m addicted to grocery stores. If suddenly all the grocery stores disappeared and I had to go cold turkey, I’m not sure I would survive. I have no backup plan. I’ve never needed one. I’d probably rush down to my local library (which I also love) and find a book about gardening. I’d work the soil and hope I could survive until harvest, living on the cans of pumpkin pie filling and sauerkraut in the deep recesses of my kitchen cabinets.

In its way the grocery store loves me too. I keep it nourished economically. We’ll probably enjoy a happy life together side by side. But terrible things happen sometimes, and the loves of our lives leave us high and dry. We expect a long cozy union but wind up with a breakup instead. And then we have to get by without, missing terribly, finally recognizing just how great it was when we had what we’ve lost.

We’re supposed to appreciate what we have while we have it, but the best things in life are the ones we’re least likely to appreciate. They’re so generous they even grant us the gift of obliviousness. My grocery store doesn’t demand that I stop to notice how much I’d miss it if it disappeared. Like the perfect surgical nurse, it’s always right there.

The New York Times reports today that unmarried households now outnumber married ones. Further evidence, some would say, of how frayed the fabric of society has become. No man used to be an island; now, more and more of us are, or so it’s said.

But this evidence points more to growing interdependence so reliable as to be imperceptible. Our dependence upon the grocery store, for instance. It’s one reason for connubial decline. The prepared foods we buy feed us luxuriously even if we don’t have a spouse to hunt, gather, or prepare them. Like cultivating a farm, cultivating a marriage is more work than getting the same products and services by purchase instead. We’re married to the grocery store, the TV, the Internet, the dishwasher, the insurance company, each of them providing some of what marriage—less efficiently, less reliably—provides. Society loves us so efficiently we get to feel less dependent while actually being more dependent.

Or perhaps our marriage to society is so complete that we can’t afford to marry anyone. The insurance and cable TV bills, the car payments, the groceries. As committed as our relationship is to society, we either don’t need or can’t afford a spouse.

Love is notoriously difficult to define. Academics would say that the word love is “promiscuous,” meaning that it’s available to anyone who wants it for any reason.

I’d say love’s essential feature is dependence. To want or need something or someone—to hope or expect something or someone. The term can encompass all unions, my love for the grocery store, my love for my partner, my mind’s love for my hands, my kidneys’ love for my liver, my family’s love for my government, my love for my car insurance provider, even a drug addict’s love for his fix. In each of these cases love is evident in how the lover would miss the beloved if it disappeared. Miss, perhaps, to the point of not surviving without it. Love is addiction, but addiction is not itself bad or good. (Search R&R.) Addiction means dependency, and dependency by necessity means the opposite of independence. To be dependent means to not feel complete without the object of dependence. It’s leaning upon something without which you would fall, or at least lose your balance.

We ask our words to describe but also prescribe, to tell us what there is but also whether to avoid or reach for what there is. Defining love as addiction is disturbing because the word love both describes and prescribes. Love is a good thing, right?

I’m not prescribing. I’m looking for a strictly neutral descriptive definition of love, and “dependence” I think captures it. Dependence is itself neither good nor bad. Dependence is inevitable. No man, woman, or child is an island. We’re never independent; we’re only capable by means of the strongest dependencies to give ourselves the false impression that we are. The trick, of course, is to form good dependencies and not bad ones. To the extent possible—one doesn’t always have a choice.

Love means becoming partial in two senses—having a preference and becoming a part. A part of something larger and also a part of your former more independent self. You can’t be dependent on someone or something without feeling like you’re missing out when he, she, or it isn’t there. For the parts to interlock in loving union, they must each have holes or gaps filled by the other.

Some would counsel that it’s better to have no expectations, to appreciate the grocery store, but not depend on it. Love and be ready to let go.

I disagree, or at least I think that “love and be ready to let go” is a question, not an answer. Taken to the extremes we’d have exchanges like this:

A: Darling, I adore you. You are my one and only. I’m so glad we’ll be together forever.

B: Well, sorry, but I have to leave you.

The trouble with love is the inevitable dependence on something that could disappear. Dependence by definition means not being able to do without. “Having some skin in the game,” as they say, though technically it’s not your skin. That is, the grocery store has skin in my game. My self is by now partly covered and protected by the grocery store, and if it disappeared I’d suffer where the skin was ripped away. Or to put it another way, I and the grocery stores that depend on me have become united under the common skin of our mutual love for each other.

This view of love as the tie that bind us, the bondage of co-dependence, necessarily entails the inevitable suffering of being torn away from that upon which you have come to depend. But it is also poignantly beautiful. Lean on me and I’ll lean on you. United we stand, divided we fall.