By Maureen Drdak on September 27, 2011 in Visual-Explorations

The imagery for LUNGTA (1) is drawn from that sublime altar of the earth that is the Himalaya—the Abode of the Gods. It was to these remote mountains, specifically the region of Lo, that esteemed Philadelphia composer Andrea Clearfield and I traveled in 2008 for the purposes of an artistic collaborative. (2) A brief bit of background is in order.

In 2007 Andrea and I were approached by Dr. Linda Reichert, artistic director and co-founder of Network for New Music. Linda envisioned a collaboration between music and visual art for NNM’s 2009-10 season, to be entitled MIX. As the thematic subject was open, I suggested the theme of Lung-Ta. (3) Having trekked to the region of Lo with my husband in 2006, I had experienced the vitality of this living yet endangered culture, and was moved to celebrate it. I also felt that the conceptual structure of Lung-Ta would find an eloquent voice through interdisciplinary expression. I initiated a proto drawing and proposal outlining its structural form and presented it to my colleagues, who immediately felt an affinity for its philosophical message and expressive potential. Dr. Reichert, however, strongly felt that the physical experience of Lo was crucial to the integrity of the project. Therefore, Andrea and I embarked for Upper Mustang in the Fall of 2008. Our resulting work would later be joined by the choreographic work of Manfred Fischbeck, artistic director of Group Motion Dance. LUNGTA (the work) is a true collaborative structure. Though all components—paintings, chamber work, and dance—are fully independent in their aesthetic integrity, they find their culmination in their interface—the performance. LUNGTA was premiered at the University of the Arts in Philadelphia on March 6th, 2009.

LUNGTA’s visual imagery draws upon two living concepts from the Tibetan cultures of these remote regions; that of Lung-Ta, or the Windhorse, and that of the Rigsum Gompo—the Three Protectors. These concepts physically and metaphysically permeate the Kingdom of Lo, which is believed to be the last remaining enclave of pure Tibetan culture. Though the origins of these specific concepts lie with the ancient Central Asian, Himalayan, and Vedic cultures, their underlying sensibilities are familiar to the West, as reflected in variations upon their essential paradigms. But the relevance of this iconography, indeed that of any imagery, lies in its ongoing capacity to connect with the present; in this essential respect Lung-Ta lives!

Lung-Ta, itself, references two parallel concepts and their corresponding imageries and forms. The Lung-Ta, or Windhorse, also lends its name to the Tibetan or Buddhist Prayer Flag. This common vernacular form can be seen strung at shrines, monasteries, and physical points of spiritual significance, both public and private. The primary image upon this square of cloth is the image of the Celestial Horse bearing upon its back the Flaming Jewels of the Dharma, generally surrounded by the text of Buddhist prayers. As it flies, it continually sanctifies the air by carrying the blessings of the Dharma heavenward, and snapping in the wind, evokes the sound of horse’s hooves. But Lung-Ta also refers to a more subtle concept; that of the Mind riding upon the Spirit, as a Horseman rides upon a Horse. The Horse represents the Prana, or Breath of the Cosmos, and the Mind, that of the innate consciousness of the universe that is the inheritance of Man. When properly aligned, through the purging of destructive negativity and ignorance, the Mind (Rider) soars into the Heavens upon the eternal energy of his Soul (Steed) and unimpeded attains Liberation, or moksha. In my paintings, Lung-Ta is expressed through dynamic gesture incorporating elements of the equine form, as well as formal references to the cloud formations racing across the vast Tibetan plateau. The horse is pivotal to the cultural and physical life of Lo, and its bodily form provides a metaphor for the expression of innumerable emotional, physical and spiritual states. Its speed associates it with the wind, and through natural extension, the clouds. Indeed, one particular form of cloud with a twisting, trailing form is known as a “Mares Tail”. Clouds, and all natural forms, are highly codified in Tibetan visual iconography, as are their symbolical associations. In determining Lung-Ta’s visual vocabulary, I have respectfully referenced these forms, interpreting and integrating them within the biomorphic structure. “Cloud Streets” (long continuous bands of clouds) and “Mares Tails” merge with muscular fragments, effectively expressing the shifting energies and moods of the Windhorse as it flies through the heavens. I have used the expressive potential inherent in the equine form to allude to both the Windhorse itself, and additionally the qualities associated with each of the bodhisattvas of the Rigsum Gompo, described below. Thus, in Manjushri, reflexively coiling clouds unfurl and stream outward, referencing the Bodhisattva who “dispels the Clouds of Ignorance.” Their gentled streams merge into the following image—Avalokiteshvara. Here the cloud streets are calm, and the great biomorphic form is gently closed within itself, or “collected”; an equine term that signifies balance, harmony and benevolence. The cloud streets continue onwards, and in Vajrapani, the bodhisattva emblematic of skillful method or action (vajra=lightening), they explode in a lightening stroke outward and off the picture plane. The resulting energy resonates and reverberates throughout the jagged biomorphic structure. Crowning the anterior plane of all three images, the deep blue of space recedes upward according to Tibetan sensibility. Conceptually grounding the work, and running concurrently through all three images, are the three pure gold threads—the Prana channels carrying the breath of life. Movement, light, and speed are the essence of LUNGTA. To the imagery of the Windhorse (Lung-Ta), I have joined the colors of the Rigsum Gompo, the Three Protectors. They function as a visual benediction. The Rigsum Gompo is a triad of three Buddhist deities, symbolically depicted within the region of Lo as three simple square edifices, or chortens, enrobed in the colored clays of this region. They are emblematic of the three corresponding Buddhist Protectors who are respectively: Manjushri, whose attributes are Wisdom and the color red-yellow; Avalokiteshvara (Tibetan-Chenrezig), whose attributes are Compassion and White; and Vajrapani, whose attributes are Action or Power, and the color blue-black. These three deities are positioned at points of vulnerability around villages and, as a triad, form an ideal unified force for the protection of all sentient beings.

In my paintings, the Rigsum Gompo are represented as three color fields occupying the lower third of the image plane. They are painted with the actual colored clays of Lo, originating from specific areas within the region, brought back by me for this purpose. Upon each of the three color fields is written one of three stanzas comprising a Prayer for Planetary Peace written by Tenzin Bista, a senior monk from Choede Monastery in Lo Monthang, specifically for this work, and addressed to the crucible of these greatly troubled times. The prayer is an invocation and benediction for Everyman, the Earth, and All Sentient Beings. It is written, literally, in iron (fine iron particles in acrylic suspension). Iron is regarded as spiritually efficacious, being associated with the meteoric iron that frequently falls upon the Tibetan Plateau and has long been an ambivalent signifier. The text of this prayer is written in the cursive form of Tibetan, called kyug yig—or “running hand”. Its expressive form, rarely seen in the West, is evocative of the rushing cloud formations of the Tibetan Plateau, and resonates with the dynamic movements of the biomorphic forms racing across the three canvases.

The Lung-Ta images are painted in acrylic on transparently primed linen and are each six by six feet. They are presented in a form analogous to the vernacular expression of Lung-Ta, that of the prayer flag. They have been cut from their stretchers and fly freely when hung in their venue. Their sensibility is therefore, of a sacral nature. My art has long been grounded in both external and internal locations of extremis; the deserts, seas and heights of the earth, and from the great philosophical visions which continually spring forth from them. As such, the Himalaya is a sanctified place where both body and mind are driven inexorably towards the reconciliation of opposites. One is relentlessly aware of physical limitations, and yet, paradoxically, experiences a limitless sense of euphoric connection. The grace of transcendence seems momentarily within reach. Though aesthetically autonomous, LUNGTA exists, ultimately, for communal benefit. It is my hope that in this respect, Lung-Ta accords with the Tibetan spiritual aesthetic, and honors the spirit of the mountains from which this work is drawn.

(1) LUNGTA refers to the collaborative artistic work, and additionally the individual paintings, chamber work and choreographic works.
(2) A personal note: Our trek was undertaken in the company of Dr. Sienna R. Craig, cultural anthropologist from Dartmouth College, and I express my gratitude to her; she was invaluable to our work, and shares in any success accrued to our effort.
(3) Lung-Ta refers to the vernacular prayer flags, as well as the metaphysical concept. 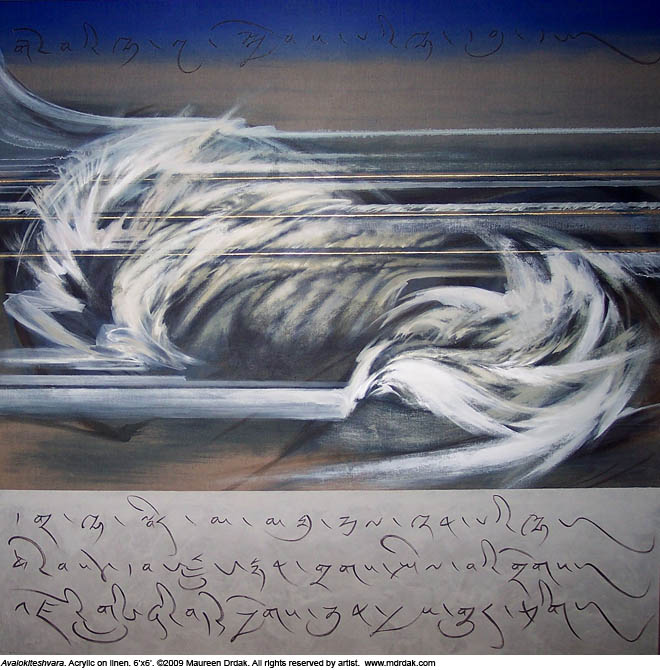