By William Grassie on September 27, 2011 in Visual-Explorations

I was in Bangkok to give a lecture at Chulalongkorn University for the Thousand Stars Foundation, one of our Metanexus’ partners. Among other activities, Thousand Stars is unique in building bridges between Theravada and Mahayana Schools of Buddhism. The conference was attended by Buddhists from China, Vietnam, Laos, Sri Lanka, India, and the United States.

The photograph was taken on the streets of Bangkok. I was stunned by these plastic Buddhist monks sitting in a shop window. The statues are of famous Thai monks and are rendered with remarkable realism. Each statue is about fifteen inches tall and has implanted hair, old wrinkled and scarred skin with bones and veins showing, glass eyes that seemed to look right through you. The plastic monks are meant to be photo-realistic, scaled-copies of the real thing—yours for only 6,500 Baht. “Do not touch” says the sign inside on the counter, where a young Thai Muslim woman with head cover is ready to help me buy my own plastic Buddhist monk. In the photograph, we see the reflection of the street activity on the store’s window and the scene of the Muslim sales clerk inside the shop. These layers of activity juxtaposed to plastic monks seems to convey something profound about our world and about Buddhism, albeit in a kitschy way.

The doctrine of Pratitya-samutpada is central to all schools of Buddhism. Often translated as “co-dependent origination”, the doctrine is central to Buddhist metaphysics. Everything in the universe, including our lives and our thoughts, are wrapped up in a circular web of cause and effect. Nothing has lasting substance; everything is conditioned by everything else. This metaphysics of cause and effect is often claimed to be quite sympathetic to the modern scientific worldview.

In Buddhist art, co-dependent origination is often represented as the Wheel of Life. Pratitya-samutpada, however, is not something to be celebrated, as some Westerns misunderstand Buddhism, for instance by putting an eco-romantic spin on Pratitya-samutpada. Co-dependent origination means infinite suffering, death, and rebirth. Sure there will be pleasures along the way, but these very pleasures are chains that tie us to unending Dukkha. Buddhism purports to offer a way out of Suffering by breaking the chains of desire. It is desire which propels codependent origination onward, as well as much of the Bangkok economic boom and night life.

These recently deceased and revered Thai monks have now been immortalized in plastic. Their inanimate meditation in the shop window is a commentary, however ironic, on the world around them. Wake up. Pay attention. 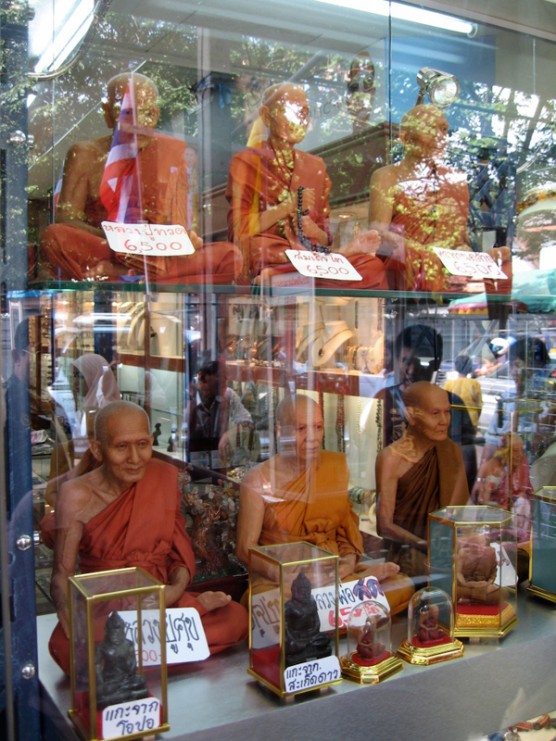