Review of Catherine Keller’s The Face of the Deep: A Theology of Becoming
May 2, 2008 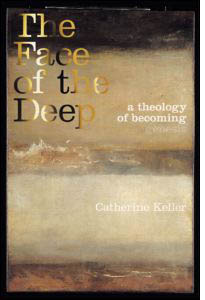 Catherine Keller is Professor of Constructive Theology at Drew University and Executive Director of the Drew Transdisciplinary Theological Colloquium. She is the author of numerous works in philosophical theology, including From a Broken Web, Apocalypse Now and Then; and co-editor of Process and Difference. Keller effectively makes the case that most of orthodox theology has assumed as ‘fact’ the notion of creatio ex nihilo. However, she contends that it is in fact a later development and not supported in the biblical text. Rather, the biblical text, as well as a fair number of theologians in early Christianity and Judaism taught that God’s spirit hovers over the watery, resonant, responsive Deep. Keller argues further that a theology that affirms a creatio ex nihilo where God is the only, unilateral agent ends up describing a macho bully, one that does not invite love to all creation.

In this volume, Keller directly takes on creatio ex nihilo, and central to her argument within this title is that the doctrine developed as a preferred dogma in western theology as a way to keep theology consistent in what it rejected as scandalous, heretical, abominable, and demonic. Despite its authority, however, the propounding of creatio ex nihilo was not able to eclipse an alternative understanding of the ‘chaosmos’ and the divine with which it is infinitely entangled. Thus, this book defines and articulates a tehomic theology. Tehom is the Hebrew word for “ocean, deep, abyss” and is used in Genesis 1:1-2, “When in the beginning Elohim created heaven and earth, the earth was tohu va bohu, darkness was upon the face of tehom, and the ruach elohim vibrating upon the face of the waters…”

A tehomic theology envisions “the Deep” as a fluid, indeterminate, germinating compilation of potentiality that generates itself and everything else infinitely, with no clear beginning or end. A tehomic theology also envisions God as the maternal ‘fluid bottomless potentiality’ and ‘womb of self-organizing complexity’ that erupts and then differentiates, and not as the paternally-derived image of the traditional Jewish, Christian, and Muslim visions of God.

Particularly, part I of the book establishes a continual contrast between a theology of “the deep” (tehom)and a Creator/creation theology (dominology). Keller contends that “loathing of the deep” leads to the desire to master chaos, to control the “origin.” Tehom however, is not “God” or a replacement for “God” (39). Rather, tehom is an invitation to allow what scientists call ‘self-organizing complexity’ to be read as God acting as co-creator (cf. 117).

Part II directly addresses the notion of creation ex nihilo—imported by means of intratextual biblical reading into Genesis 1. Keller lays some blame upon Irenaeus’s critique of the gnostic usage of tehom as the reason for its virtual elimination, but lays more blame on Athanasius whose understanding of eternity, power, and nature express the “classical homophobia” that pairs with “tehomophobia” (62). Augustine’s theology shares similar flaws, as he displays a “tehomic ambivalence” (66). She further notes that Barth, while rejecting creatio ex nihilo as unbiblical, his understanding of God nevertheless causes Christian dominology more, according to Keller, than even Athanasius. In fact, for Barth, the “deep is not nothing, but worse than nothing” (84).

Part III attempts to negotiate a theological pathway through recent biblical interpretations of the Genesis account. For example, Keller argues that the Enuma Elish, with its story of Marduk’s battle with Tiamat, is a more probable interpretive framework for Genesis 1:1-2 than is creatio ex nihilo. Drawing from various Christian and Jewish exegetes, Keller argues that one can discern in Genesis 1:1-2 a hidden ‘biblical tehomophilia’.

The chapters of part IV discuss portions of the text in Genesis l:l-2. In the process, each of the following are examined: “When beginning,” “created God,” “formless and void,” “darkness on the face,” “deep,” and “Spirit vibrating.” As these phrases subtlely suggest, through constant evocations of female sexuality, Keller gives a feminine personality to “the deep.” Keller also makes several assertions that clearly put in her in the camp of process theology. In dialogue with Whitehead, for example, Keller posits a panentheistic theology that re-conceives the immanence and transcendence of God in radical ways. In fact, drawing upon Deleuze and Alfred North Whitehead, she subjects the notion of “origin” to a strong critique, arguing that any attempt to find an origin is an attempt to onto-theologically control things, which she resists. In its stead, she proposes a “tehomology” or “tehomic theology” (159), which is indebted to, among others, Luce Irigaray and Julia Kristeva.

In sum, according to Keller, theology is “an incantation at the edge of uncertainty” (p. xviii). After reading this book, the non-attuned reader might concur. However, for the reader that reads attentively, many nuggets of wisdom can be mined from the text. For example, she offers a theology of becoming in which creatio ex nihilo (creation from nothing) is given up for the counter position of creation from chaos (or creation from the deep). Moreover, she contends that theology cannot be definite, closed, and certain, since the way God works in the world is not. Keller’s constructive proposal includes insights from a position of panentheism, biblical studies, Jewish mysticism, literary analysis, postcolonialism, and feminism. I recommend this title for individuals at the graduate level who are interested in the continuing dialogue between religion and science.