Review of Christopher Hitchens’ God is Not Great: How Religion Poisons Everything

Review of Christopher Hitchens’ God is Not Great: How Religion Poisons Everything
December 5, 2007

Review of Christopher Hitchens’ God is Not Great: How Religion Poisons Everything

By Varadaraja Raman on December 5, 2007 in Book_Review 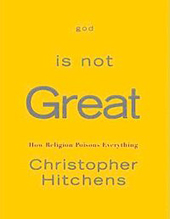 Preamble: If you find my reflections on this book to be somewhat perplexing, it will be because I don’t subscribe to the ancient view that categorizes everything in the world into Good and Evil. Regrettably, this book which is so insightfully eloquent in condemning religions falls into that same ancient trap. That is why, borrowing a Dickensian phrase, I will say that this is the best of books, this is the worst of books (on religion). It is best in its merciless flogging of all that is bad in religions. It is worst in its inability to see anything good whatever in religious traditions. So I praise this book, and I also criticize it. I agree with much of what it says about religions. I am unhappy that it ignores many other matters about religions.

Contents and title: Leaving aside minor mistakes like the alleged assassination of “the elected president of India” (p. 199), and blatant sensationalism like “Hindu child brides in India are flogged and sometimes burned alive,” (p.51), this is one of the most eloquent, powerful and (by and large) intelligent articulations of the atheist’s manifesto on religion. It is replete with instance after instance of how religion-inspired behavior and scriptures have been embarrassments to rational thinking and common decency all through human history. Its litany of absurdities and horrors should make any atheist jump in ecstasy while theists may be provoked to exclaim that it is the devil who is not great.

It would seem that Hitchens is deriving some perverse pleasure from taunting religionists, because he has deliberately chosen a title to challenge the daily proclamation from mosques and minarets, when a more appropriate one would be: Religions are not Great.

Language: Most of Hitchens’ narratives are well-reasoned, his arguments are incisive, and his anecdotes are telling. Unfortunately, some of them are marred by ad hominem attacks, with words like fraud, hypocrite, fool, and idiot. Thus, Malcolm Muggeridge is silly (p. 145); Pascal reminds him “of the hypocrites and frauds who abound in Talmudic Jewish rationalization (p. 212);” Pascal’s “theology is not far short of sordid” (p. 211). Mel Gibson is an Australian fascist (p. 104). But his favorite epithet is stupid. Bishop Heber’s hymn is stupid (p. 199); the “gruesome laws of the Pentateuch are stupid” (p. 121); the notion of intelligent design is stupid (p. 85); the factions which took an interest in native-American burial grounds were stupid (p. 162); the magazine in honor of Osho is also stupid (p. 197).

Gone are the days when the polished language and refined reasoning of Bertrand Russell were the model for attacks on religion. Just as the boundary lines in movies have gradually been stretched in the use of foul language, coarse attacks on religion are also becoming more daring and explicit. Now you can use the word stupid half a dozen times in a book that is less than 300 pages to make your point. Such language is quite acceptable, except in regions and religions where the author’s physical existence will be put at risk. Indeed, the strongest argument against religions should be, aside from the superstitions they engender, the threats they pose to free thought and speech wherever their spokesmen hold power over people’s lives. Hitchens doesn’t devote enough pages to this.

One-sided grudge: Hitchens speaks bluntly about the evils perpetrated by religionists, and also truthfully about the inconsistencies inherent in religious doctrines. But the way he presents his case is like that of the man who, because of a major car accident in his childhood which left a permanent scar on his psyche, was inspired to write a treatise called: Automobiles are not Great: How cars kill people and pollute the atmosphere. Such a book might say it all very well, but then the automobile industry has manipulated the public into believing they can’t live without the vehicle. Also, the public has grown so accustomed to its more useful aspects (especially if they can avoid DWI and invent effective catalytic converters) that they are not yet ready to set all cars on fire. That is the situation with religion in the world. At this point its usefulness outweighs its negative impacts. This is why it is not likely that this book will displace religions from human culture any more than that a mosquito will move a mammoth. Practically every horrible thing the book details is valid, but its merciless denigration of religions is like the unsophisticated report of the garbage-collector who imagines that households generate only trash and filth.

Lack of experiential background: Hitchens has visited many religious congregations all over the world, of all faiths and denominations. I too did exactly that for a whole year, and was greatly enriched by participating in the spiritual richness and beautiful music that the services offered, and touched by the genuine caring and the charitable impulses that they fostered. But Hitchens does not seem care for any of the aesthetic dimensions of religions, much less been moved to lofty heights by the visions, real or imaginary, poetic or promised, of any religion. It appears that as one who has only observed them as an unsympathetic outsider, he hasn’t been able to taste any aspect of religion the way practitioners do. This is fine, but on that constrained basis he is not entitled to insist that others shouldn’t or can’t taste them either, or that those who do are mindless. Indeed, sometimes he writes like postmodernists who blurt out inanities about science without ever having done a laboratory experiment, peered through a telescope, or done a complex calculation.

Charges against religion: In making his case for why religions ought to be dispensed with, Hitchens lists a series of charges against them (p. 205), all of which are valid up to a point, and none of which is taken literally by countless practitioners of the major religions in this day and age. The first of these, “presenting a false picture of the world to the innocent and the credulous” reveals his bias: the pictures are not false (which implies intention to cheat), but mistaken (like the 18th century phlogiston theory), formulated centuries ago by thinkers who did not have the benefit of the knowledge and insights we possess today. We can in fairness blame the folks who adopt them today, but not the originators of the ideas.

He lists the doctrine of blood sacrifice as another evil. But not all religions subscribe to this: Christianity, Buddhism, Sikhism, Jainism, and Vaishnava Hinduism are generally against this practice, and they include vast numbers of religious people. “The doctrine of atonement” which he condemns also is a metaphysical mode for accepting responsibility for misbehavior, and seems to work well on people who haven’t brought themselves up to the level of self-criticism and self-punishment for undetected actions that are hurtful to others. The fourth charge is “the doctrine of eternal reward and/or punishment.” Again, a valid criticism, but it works well among the masses. When artifacts were stolen from the Baghdad museum after the fall of Hussein, an Imam issued a call to the vandals, threatening them with eternal residence in the Islamic hell: sure enough, many items promptly found their way back to where they belonged. A misguided doctrine for sure, but one that served a purpose. The last charge, “the imposition of impossible tasks and rules,” strikes me as being the least serious. Such rules have always existed in civilized societies. True enough, most of them have their roots in religions, and border on the ideal. Celibacy, refraining from promiscuity and pork, loyalty to spouse and the like are not as terrible as they are made out to be. More often than not they are secretly violated, maybe with an occasional feeling of guilt.

Harsh judgments: In his scathing analysis, Hitchens spares no sacred book. In his rebukes he gives not an iota of respect to anything remotely linked to a traditional religion, not even to the Beatitudes. In his judgment on prophets and saints, he doesn’t mince any words: The Dalai Lama’s pronouncements are absurd (p. 200); Martin Luther became a bigot (p. 180); Muhammad is a mammal (p. 135); Augustine was “a self-centered fantasist and an earth-centered ignoramus” (p. 64); all he can say about Abraham is that he “agreed to murder his son” (p. 207).

Positive aspects: It must be said that the commentaries of Hitchens are extremely persuasive. He comes to the point with ruthless frankness. His book is spiced with random, if sometimes superficial, tidbits on practically all the religions that count, which makes for interesting reading.

It is difficult for enlightened minds not to resonate with the harsh comments on the dark sides of religion that Hitchens paints in profusion and with great passion. At the very least, any fair reader has to be empathetic to the understandable anger and frustration that so many feel about the madness and mayhem that still emanate from many mindless practitioners of religions. Sadly for human civilization, in the context of the atrocities and abominations that have been and still are being perpetrated in the name of God and religion, a book like this is inevitable, perhaps even necessary. That’s why ours is an age in which treatises on atheism are doing well in the marketplace. Richard Dawkins, Daniel Dennett and Sam Harris are leading luminaries in this matter. This book is another solid contribution to this growing field.

Concluding thought: Even if this book angers many who are wedded to ancient worldviews and saddens those who wish to see more balanced portrayals of one of the most persistent and meaningful institutions in human civilization, it can certainly serve as a valuable eye-opener for the uninformed and the uninitiated. With appropriate commentaries, this book could serve as a good antidote to naïve and extremist exaltations of the outworn doctrines and dangerous incitements to fanatical behavior that are very much part of today’s world.