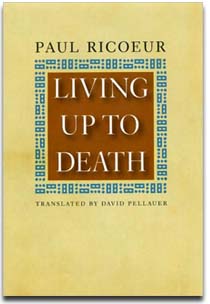 In recent years there have been a number of publications written shortly before the author’s death. I am thinking of Jacques Derrida’s Learning to Live Finally: The Last Interview (2007), Dorothee Soelle’s The Mystery of Death (2007) and now the book under review. What the three works have in common is that each presents a reflection on death, was written shortly before the author’s death or, at any rate, as in the case of Ricoeur’s essay, in anticipation of it. Equally fascinating is the fact that all three of these authors use their reflection on death to contemplate their life’s work. They all think about death in a post-resurrection mode, in which concern about personal immortality makes way for a form of ‘ongoing life’ directed to the other/Other.

Ricoeur’s book is comprised of an essay and nine fragments, collated in 1996 (a year after his death). The handwritten essay was discovered by Catherine Goldstein a few months after Ricoeur had died in a file labeled, “Up to death. Mourning and cheerfulness. PR”.  The essay constitutes the core of an uncompleted book on mortality. The fragments were written by Ricoeur in the months leading up to his death and so represent his last work.

The preface (vii-xxii) of Living Up to Death is written by Ricoeur’s close friend Oliver Abel, who traces the background to the work to three questions that Ricoeur posed to himself in the Winter of 1995-1996: 1) “imagined figures” (what representation can I give myself?); 2) “mourning and cheerfulness” (what is their root?); and 3) “Am I still a Christian?” (along with “In what way am I not a ‘Christian philosopher’?”). To these Abel rightly adds a fourth theme: the meaning of the resurrection (viii).

Ricoeur’s life work is marked by the will to understand and interpret – not only texts, but especially life as a text. A key theme in the book’s central essay is the relation between writing and life (the way an author’s oeuvre survives him is a prominent theme in Derrida’s aforementioned work). Ricoeur’s testimony here was inspired by his reading of a text by Jorge Sempr�n, L’Ecriture ou la vie (1994).Sempr�n wrote as a survivor of a Nazi deportation camp (Buchenwald) who had accompanied fellow inmates in their dying moments.

Our reflection on death and especially someone else’s death is complemented by a make-believe situation of our own death that we shall face someday. What Ricoeur finds terrifying is “the dying  person I shall be for those who attend my death” (13). The concept of make-believe is applied to our understanding of the other’s death, our own death and, thirdly, the way death is personified (14-22). The personification of death is discussed with reference to the Kaddish (prayer for the dead) (20-22, 24), as is the relation between (radical) evil and death (especially in light of the concentration camp story).

How does one write about death?  This is not a distant, objective view. Sempr�n finds it hard to speak of it, for the experience of death in Buchenwald now lives only in memory.

Ricoeur likewise finds it difficult to write about it in the present tense. He muses that there is “No way of presenting [death] in the present tense; that is, the moment of dying as passing” (34). On this point, Wittgenstein commented that death is not a life event: humans do not experience death. So how can they write about it? “Then, one perhaps discovers that no one has ever experienced death” (38).

The next section (p 41-55) is about death as perfect detachment and trust in God’s care. The work of mourning comes at the expense of any attachment to self. It requires transferring love of life to the other (42).  Ricoeur first considers perfect detachment (41-42), which he sees as a process of “dismantling the make-believe of survival pushed to the limit”. The detachment does not seek to deny imaginary projections, but to transfer love of this life to the other. It should be seen as Ricoeur’s attempt to affirm life for those who will carry on, and this is what makes the detachment process possible.

Next (42ff) Ricoeur deals with the question of trust in God. He regards Whitehead’s notion of God’s memory as “a hypocritical form of imaginary projection” and as “imperfect detachment.”  He prefers to rely on the idea of grace: “Then a hope other than the desire to continue existing arises” (44). This is followed by one the most profound thoughts in the book:

“Can one think of this hope in God’s memory using the categories of ‘salvation’? Only with difficulty: at the price of a radical purification in relation to the Pauline heritage of the redemption of sins. It is a question of an infinitely more radical salvation than the justification of sinners: the justification of existence” (44).

Here one senses a severance of the causal connection between sin and death, as well as between redemption and eternal life. The accent shifts from death to life – a major theme in the present-day emergence of secular spirituality focused on life.

Ricoeur cites X. L�on-Dufour, who pointed out that “Jesus used language other than that concerning the after-life and the end of time, and in this he departs from the prophetic tradition,” where everything is future (45). Personal survival is drawn into this impulse to the ‘end-time’. “The whole rhetoric of a coming judgement exploits this eschatological futurity” (45). Ricoeur’s thinking in this line focuses on life rather than afterlife. He wants to demythologize the notion of judgment, inter alia because of its heavy dependence on punishment (as salvation and forgiveness are dependent on sin) (46).

Finally Ricoeur tries to connect the two lines of detachment and trust (49ff) in terms of Jesus’ notion that those who lose their lives will find life. It is linked with service and the concept of kenosis/necrosis – all directed to the other “who is my life after afterlife” (50-51). “Service alone, tied to the gift of life, destiny and obedience at one time” (54).

The concluding section of Living Up to Death (59-90) contains the fragments. Although written telegram-style, this section contains valuable ideas. I summarize them briefly. The first fragment deals with the time to work and the time to live. Ricoeur experiences that “I am moving away from the immortal time of the work, and I withdraw into the mortal time of life…” (60) – a process of dispossession. The second fragment (62-68) is on his position as a Christian. It is his heritage and his destiny, whose hermeneutic status he tries to establish (64). Ricoeur does not want to express his relation to Christ as faith but as ‘adhesion’, rooted in his cultural heritage (68). Following Piettre, he writes: “Doctrine arises out of constant interactions and feeds on what it denies” (67).

The next short fragment (69-70) deals with conceptual blocks to the notion of a Christian philosopher. This is followed by another fragment (71-71) that criticizes the idea of a sacrificial theory; then he raises the issue of dogma anew (73-75). The next two fragments deal with the problem of historicity and the biblical saga (76-81). He realizes that “[a]dmiration for the mythopoetical genius of Israel quickly compensates for the first deception of having lost … a historical idol” (81). Then there is a fragment on parts of the Lord’s Prayer with reference to the work of Marc Philonenko (82-84), the French theologian. The last fragment deals with Derrida’s notion of “learning finally how to live” (published in 2007 as Learning to Live Finally: The Last Interview). Here one discerns a fascinating difference from Derrida: Derrida sees himself as surviving in his writings, whereas Ricoeur wants to relate his life and work to others.

This last work by Ricoeur, published posthumously, does justice to the stature he gained in his lifetime as a leading 21st century philosopher. This small book may be useful in the ongoing science-religion dialogue, since it deals with some of the obstacles in the discussion.