Review of Michael S. Kogan’s Opening the Covenant: A Jewish Theology of Christianity

Review of Michael S. Kogan’s Opening the Covenant: A Jewish Theology of Christianity 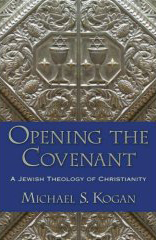 Michael Kogan’s ambitious project sets out to do just what its title promises: to come up with a Jewish theology for Christianity, an opening of the Covenant with God to include gentiles, too. He claims that the historical examples he presents in the book have all been Jewish ways of understanding their sister faith. What is needed, he argues, is that “the Jewish thinker who attempts to understand Christianity must strive to develop a Jewish approach which comes as close as possible to the way in which Christianity sees itself, while still remaining wholly Jewish” (52).

The Introduction provides a brief overview of the developments and setbacks in Jewish-Christian relations. The most significant change in this progress, Kogan contends, has been the Christian reevaluation of Judaism and he sees Vatican II as a milestone in this respect. Just as Kogan describes the attitude of many churches in the past as characterized by Christomonism (which, he admits, many of them are finally moving away from), he also concedes that certain branches of Judaism have also been guilty of Judaeomonism. However, claiming that it is not likely that any one tradition may be able to say all about God and humanity and their interrelationship, he bravely posits that “perhaps the gaps in Judaism’s worldview are filled in by Christianity, and vice-versa” (6).

The author begins his first chapter by trying to clarify and define the terms he uses, recognizing from his own experience as university lecturer the relative ignorance of not only each other’s religious traditions, but also of our own. He therefore proceeds with a general summary of the theologies of Judaism. He sums up the people of Israel’s mission in the world as laboring for the day “when all will recognize the universal moral law and the Kingdom of God will shine forth undimmed” (19).

How non-Jews can fit into the moral framework prescribed by Judaism occupies a significant portion of the first chapter and the author laments the fact that Jews “were prevented from seeing Christianity as a new Jewish outreach into the world and Christians were misled into thinking they had replaced the Jews rather than having joined them in the eternal covenant with God” (23).

So, what might a Jewish theology of Christianity look like? Kogan argues that Jews can see Jesus “not as the Messiah conceived by our Rabbinic Judaism, but as one sent by Israel’s God to open the covenant to gentiles” (55). He continues, “Jews can entertain the possibility of the truth of Christianity only if we view it as a faith revealed by Israel’s God to and for gentiles” (56).

What follows in Chapter Two is a discussion of probably the most contested question in Jewish-Christian relations: the Messiah. Here Kogan examines the concepts of the royal Messiah and the priestly Messiah. Thirdly, mentions of the “suffering servant” in the Jewish canons are discussed, in whose tale the whole saga of Israel’s history is contained and metaphorically expressed, claims the author.

A survey of post-canonical Messianic conceptions and the appearance of the Messiah in Pseudepigrapha, Apocrypha and the Talmud follows. Summing up his findings, he questions whether it can be maintained that a mainstream messianic idea or expectation was present through history. He also argues that Jesus brought means of redemption to the gentiles (albeit no redemption to Israel), thereby “helping Israel to fulfill its calling to be a blessing to all peoples” (112). He was a redeemer from Israel.

There is also a study of the life and work of three “Jewish theologians of Christianity”: Menachem Ha Me’iri (1249-1315), who went as far as including the Christians under the category “Israel” and was also tolerant toward Islam; Moses Mendelssohn (1729-1786), who, inspired by ideas of the Enlightenment, saw all God’s children as brothers and sisters due to a rational common nature; and Elijah Benamozegh (1823-1900), who also emphasized the sisterhood of the two faiths and was a precursor to the significant advances in Jewish-Christian relations that were to come in the 1960s.

Chapter Four is concerned with the religious self and the other and how it is possible to affirm the other’s theology without going too far. Kogan’s conclusion is that loving our neighbors can mean affirming our own faith while making room for that of the other. He tries to answer the related ethical and theological dilemmas through introducing the work of three modern Jewish theologians (Franz Rosenzweig, Martin Buber and Abraham Joshua Heschel) and three modern Christian theologians (Paul van Buren, A. Roy Eckardt and Clark M. Williamson), who have all attempted to re-assess the relationship between Judaism and Christianity. Then, writing from his own Jewish point of view and primarily for a Jewish audience, Kogan challenges his readers to consider the divine inspiration of Christianity. If they do it, he claims, this will mean that Judaism itself will have to re-evaluate its claims to truth but Jews will also understand their own faith more fully by expanding their worldviews.

Chapter Five looks at the historical developments within the Christian churches since the 1960s in reevaluating Judaism, emphasizing the conciliar declaration Nostra Aetate and Vatican II. He continues the historical survey in Chapter Seven, looking at post-Vatican II progress and claims that a revolution has taken place since then. Highlighted among other things is Dabru Emet from 2000, a “thoughtful Jewish response” to Christianity sponsored by the Institute of Jewish and Christian Studies of Baltimore, which focuses on respecting the other faith and its followers. He calls this statement a significant document, to which a group of Christian scholars has since responded.

Chapter Six introduces two contemporary theologians of the dialogue. The first one is Irving Greenberg, who calls for a Jewish reevaluation of Jesus not as a false messiah but as a failed messiah. While Kogan disagrees with many of Greenberg’s assertions, he acknowledges Greenberg’s bravery to bring up hotly contested issues. The second theologian Kogan introduces, John Pawlikowski, has challenged Jews to begin to “think seriously about Christianity as a complementary religious tradition” (247) and stated that by studying the teachings of Jesus, Jews can also be enriched and inspired.

In the next chapter Kogan turns his attention to the religious narrative as it relates to interreligious dialogue: where do our truth claims originate? How does a religious person see the world differently from a non-religious person? He uses Jewish beliefs and canons as examples but does not limit his observations to this one religion.

Chapter Nine advocates the bringing of the dialogue to the grass-roots level which the author considers crucial and shares some of his own experiences of growth and challenge in interaction with Christians, e.g. holding interfaith Thanksgiving services and guest preaching in churches. Chapter Ten explores the effects of politics (particularly the Israeli-Palestinian dispute) on Jewish-Christian dialogue.

The concluding chapter is the author’s plea for developing a pluralist theology of Judaism, which recognizes that revelation is real but partial – and at the same time also universal. Religious exclusivism, he claims, “is nothing more than corporate egoism of creed and community” (374) and in the case of Jews in the global context, also “theological madness” (371).

Throughout the book, the author displays a thorough knowledge of both faith traditions and sometimes uses examples from his own experiences to illustrate his points, which is really helpful. Although it is a relatively lengthy read, it is certainly worth investing one’s time into due to the subject matter. His writing is sometimes too painstaking and technical but is interspersed every once in a while with refreshingly amusing statements, such as, “heresies are often the most exciting expressions of religions” (326). Having at least basic theological and scriptural knowledge will definitely aid the reader.

Again and again Kogan returns to the Christian churches’ representation of Jesus and agrees (although mostly not by explicitly using these words) that a low Christology is one of the keys of building bridges between the two faith traditions. He brings his own example as an illustration: delivering a sermon entitled “Jesus the Jew: A Reappraisal” at his synagogue on Christmas Eve in 1982.

One of my main criticisms of this book is that the perspective of Eastern Christianity is entirely missing. Adding it would have made the discussion of certain concepts even richer in many ways, for example as it relates to ideas of salvation, the concept of a chosen nation, and to certain religious narratives. It is also a relevant issue for another reason. Although Kogan seems to address a primarily North American audience, many of his references are from Europe and the Middle East: geographical areas that have formed the frontier between Judaism and (in many cases Eastern) Christianity and the cultures they exist within.

Overall, this is a groundbreaking work, which provides a lot of food for thought not only for Jews and Christians, but also for followers of other religions. Especially in our increasingly fragmented and pluralistic world, the issues Kogan raises should not be avoided if one is looking for authentic answers to life’s great questions, particularly as it relates to living in peace with one another.