By Joan Koss-Chioino on September 3, 2008 in Essay 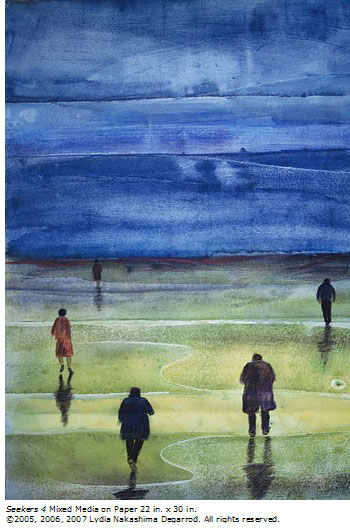 Although readers may have seen advertisements for books or brief announcements about the Spiritual Transformation Project (STP; 2002-2005) developed by Dr. Sol Katz, this issue of the Global Spiral intends a fuller acquaintance. It includes an overview of the project, book reviews, chapters from two of its resulting publications, and two original papers, based on ideas that are outgrowths of the project. Although this issue presents only a few pieces in the patchwork that made up this extensive, carefully designed and orchestrated research project, we hope the reader will capture some of the flavor of this vital effort to make the subject of spiritual transformation an important area of study.

What is a spiritual transformation? Although long recognized as a widespread (perhaps universal) phenomenon, the scientific study of spiritual transformation is relatively recent. However, its antecedents are over 100 years old in descriptions of religious conversion (Starbuck, 1899; Paloutzian, 2005). William James’ work (1902; 1958) was foundational. It extended the concept of religious conversion to discussions of mysticism, spirituality and healing. Although it may appear at first glance that the concept and study of spiritual transformation is of obscure interest for scientific research, a recent study (in part funded by the Spiritual Transformation Scientific Research Project) carried out by the General Social Survey (GSS; Smith, 2006) found that it is widespread, once people are questioned about their spiritual experiences. The GSS study consisted of in-person interviews of a full probability sample of adults living in households in the United States. It found that 50.4 percent reported a spiritual transformation at some time during their lives. The participants were asked if they: 1) had a turning point in life when they made a new and personal commitment to religion, 2) had a religious or spiritual experience that changed their life, or 3) had been “born again” and made a commitment to Jesus Christ. The largest number reported being born again (32.8% of the total sample) 17.6 percent underwent a religious or spiritual change that was not a born-again experience. It seems clear that spiritual transformation is not an uncommon experience in the United States and that not all transformations occur within organized religious contexts. International studies also show its widespread provenience.

Spiritual transformation is a broad concept and category of ideas; it demands a trans-disciplinary approach. Studies of religious conversion have been popular in the sociology of religion since the 1950s, such as described in Lewis Rambo’s work (1993), and have increased over the last two decades. Rambo’s discussions and definition of “genuine” conversion reference the major religions. He defines conversion as “a total transformation of the person by the power of God” (Rambo, 1993: xii) which seems to limit the definition to the subject of theology. Although there have been some earlier references in psychology since James and Starbuck and their contemporaries, and a chapter by Paloutzian (1995), there is no index reference to spiritual transformation in the large and informative Handbook of the Psychology of Religion and Spirituality (Paloutzian & Park, 2005). However as an advisor to the STSRP, Pargament (2006) has written about the construct and defines spiritual transformation broadly to reference many types of experiences, both religious and spiritual in nature, both within and outside organized religious contexts: “Spiritual transformation refers primarily to fundamental change of the place of the sacred or the character of the sacred as an object of significance in life, and secondarily to a fundamental change in the pathways an individual takes to the sacred” (Pargament, 2006: 21). Perhaps the most relevant dimension of this change, as emphasized by Paloutzian (2005), is change in the ultimate concerns, values, meanings, and corresponding life directions of an individual. According to Paloutzian, (2005:338) religious conversion is but one kind of spiritual transformation. He views spiritual transformation as including any degree of “change in strength or type of one or more specific elements in the meaning system” of a person, not necessarily a complete revision of that system. However, in the STSRP, spiritual transformation referred in a broad way to extreme change in meaning and life goals of an individual, permeated by a profound change in degree or kind of spirituality, within or outside religious contexts. It must be noted that this concept allows for variations, such as slow realization of change with antecedents that can be charted vs. sudden dramatic change, largely toward positive ends but also, at times, toward negative goals.

Spiritual transformation has been a part of the anthropological literature on healers and healing almost since the inception of that discipline, although it hasn’t been labeled as such, with the exception of Richard Katz’s work (1983/99). As an individual experience it is described in numerous studies of healers, particularly in association with their initiation into, or assumption of, the healer role (see Csordas & Lewton, 1998 ). Once an individual undergoes a spiritual transformation in certain social and ritual contexts, this frequently results in his or her becoming a healer. It might be noted that spiritually transformed persons may become healers, community organizers or caretakers of the ill, and they may also deeply affect others by preaching and practicing familial or community reforms, or even advocating extensive social and/or political change.

Decades ago Wallace (1966) carried out studies of men who had suffered severe illnesses or devastating psychological experiences that often resulted in near death experiences, who, upon being transformed, became the focus of a “revitalization movement” that led to far reaching societal changes in communities suffering from chaos and anomie. Wallace (1966) named these seminal persons “revitalization prophets.” He joins William James as an intellectual ancestor of the broad concept of spiritual transformation that has been the foundation of the Spiritual Transformation Scientific Research Project. Within the past century there are a number of persons living and deceased who might qualify for the title of revitalization prophet: Gandhi, Martin Luther King, Jr., Thich Nhat Hahn, Bishop Desmond Tutu, and Nelson Mandela—just to name a few. (It is perhaps of interest that Barack Obama has been satirized as a “prophet” by opposing politicians. Yet one might guess that he also underwent some sort of spiritual transformation, since his platform is based on change in the broadest sense—in both world view and policies.)

The broad concept of spiritual transformation has also inspired studies in neuroscience, as can be appreciated in the work by Newberg (2006) in his chapter in the book on Spiritual Transformation and Healing (2006), and the book by Beauregard and O’Leary, The Spiritual Brain (2007), which describes an experiment with Carmelite nuns funded by the STP; both books are reviewed in this issue. The disciplines of psychiatry, medicine, developmental/child psychology, theology/religious studies, criminology, medical anthropology, social work and community organization were all represented by advisors, reviewers and awardees of the STP, many who are well-known scholars in their fields.

The first contribution to this special issue is by Solomon Katz, Ph.D, former president of Metanexus Institute and originator and director of the Spiritual Transformation Project. Dr. Katz describes the project and its organization and procedures; the STP awarded 23 research proposals, selected through a complex review process. Other contributions to this special issue, pieces that represent some of the extended outcomes of the STP, are:

This special issue of The Global Spiral provides only a few of the now numerous products of the STP by participants—grantees, advisors and proposal reviewers—as well as by other scholars who have recently developed an interest in studies of spiritual transformation. From the very beginning, the wide range of interest by scholars and researchers across diverse disciplines in the initial call for letters of intent surprised even the review committee, even though the committee was made up of scholars from a number of disciplines. It is increasingly evident, through the continuing appearance of new publications, studies and presentations, both at professional and popular meetings, that the STP has led to the development of a fascinating and engaging field of research.