It was the first meeting of the International Big History Association, and it brought together 200 academicsâ€”university, secondary, and primary school educators from diverse disciplines, as well as some creatives and activistsâ€”united with a passion for putting together â€œthe whole damn story.â€ Over the course of four days in Grand Rapids, Michigan, we were wowed by 143 presenters, performances, visualizations, and keynote talks.

Our host at Grand Valley State University was Craig Benjamin, a professor of history in the honors college. An Australian transplant to the United States, Benjamin was joined by David Christian and a number of other Australian educators, who helped create a down-under, upbeat vibe in this Midwestern town.

The opening reception in the Grand Rapids Public Museum included a planetarium lecture by David McConville on â€œVisualizing the Limits of Knowledge.â€ McConville is a theorist, media artist, and co-founder of The Elumenati, a design and engineering firm that integrates visual immersion, social interaction, storytelling, real-time visualizations, and scientific data. He also serves as president of the Buckminster Fuller Institute. His interactive tour of Hayden Planetariumâ€™s Digital Universe transported us to the farthest reaches of the universe and back.

The panels and presenters of the conference were split between educators discussing their classroom experiences and researchers reframing big questions and big problems from the perspective of Big History. One memorable panel had McConville, Mojgan Behmand, Fred Spiers, Barry Rodrigue, and Rich Blundell sharing personal stories of how their professional lives led them to Big History. During coffee breaks, meals, side conversations, and late night sessions, a community began to form, as frequently isolated educators discovered others with similar passions from around the world. In all, eight countries were represented at the conference.

One morning was devoted to plenary sessions beginning with an overview and progress report on the Big History Project, a ninth-grade curriculum funded by Bill Gates as a free, online, and open resource for teachers and students. The curriculum is broken up into 10 units and two parts split evenly between pre-human and human history. Andy Cook, the dynamic director of the project, was joined by a number of the teachers involved in the pilot courses offered last year, who uniformly praised the project and its ability to ignite a passion for learning among their students and a renewed enthusiasm for teaching among their colleagues. The pilot program helped to improve and refine all aspects of the course and to develop activities and lesson plans. 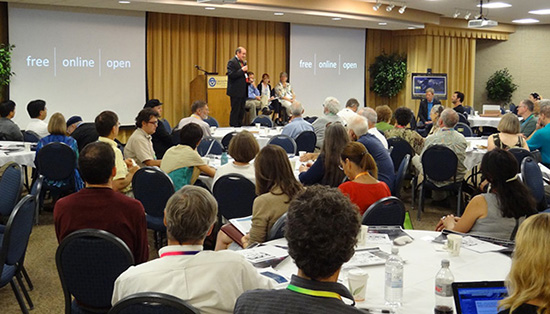 Bob Bain, a professor of education from the University of Michigan and a consultant on the curriculum and assessment, explained why the concept of Big History addresses a number of critical problems in education today. The current courses and curricula can be thought of as a jigsaw puzzle given to students without the box topâ€”and without the image of the whole puzzle on the box top, putting the pieces together is an impossibly frustrating experience. Big History provides the framework for putting the puzzle pieces together. Along the way, students learn lots of facts in context, but also how to use those facts and think critically in evaluating information. As well as scientific and historical knowledge, the Big History curriculum advances reading and writing skills across the disciplines. Students are taught how to evaluate news and views based on evidence, logic, authority, and intuition. Bain described Big History as an on-ramp that deals with all disciplines.

One of the pedagogical innovations developed by the teachers was the idea of â€œLittle Big Histories,â€ in which students are asked to research and write about some aspect of the contemporary world, tracing an object back into deep time. Deborah Smith Johnston from the Lakeside School in Seattle told the story of a student who wrote a brilliant â€œLittle Big Historyâ€ on Cheez-Itâ„¢ snack foods. The student explained that:

To the uninformed the Cheez-Itâ„¢ itself may seem insignificant, but the history and modern climate that it reflects is quite the opposite. â€¦ The Cheez-It, an unassuming and humble cracker, is the result of millions of years of progress and evolution. From the first blade of grass of the earliest ancestor of wheat 60 million years ago, to the new flavors that the company launched in 2011 (Kellogg NA Co.); Cheez-Its are a representative of the constant increases in complexities that our universe and planet are subject to.

This coming academic year will include some 45 schools in an expanded pilot program, before the Big History Project goes public in 2013/2014 as open courseware freely available and adaptable to all comers. The ambition is for the curriculum to be offered in every school.

A second plenary session focused on ChronoZoom, an outgrowth of Walter Alvarezâ€™s Big History course at the University of California, Berkeley. Roland Saekow, one of his undergraduate students, submitted ChronoZoom three years ago as his final â€œpaper.â€ The online program allows users to zoom through the 13.7 billion year time scale of the universe, viewing images, videos, and articles appropriate to each timeframe. Saekow, now a graduate, continues to work on the unique tool, now supported by Microsoft Research and Moscow State University in Russia. The project is open source and is being built out by NASA, the Smithsonian, and others, who are adding rich content in its chronological context. Rane Johnson from Microsoft Research led the participants in a lively small-group exercise and brainstorming session.

In his keynote talk at the first conference dinner, Alvarez gave us a â€œLittle Big Historyâ€ of Spain going back 600 million years. From chaotic orbital dynamics and the foibles of plate tectonics to the vagaries of health resulting in the crowning of Charles V as Holy Roman Emperor and atmospheric dynamics in the destruction of the Spanish Armada, Alvarez argued that improbable and unpredictable contingencies play a critical role in Big History. He ended his talk with some back-of-the-envelope estimates on the number of â€œconceivable individualsâ€ in the next generation:

For Alvarez, as for the audience, these astronomical numbers evoked a sense of awe and wonder. The contingent improbabilities of each person and our collective Little Big Histories led to amazed appreciation for the shared moment and mission that had brought us together.

In spite of the enthusiasm at this inaugural IBHA conference, the adoption of the Big History framework in the modern university is sure to bump up against resistance and turf battles, of which many spoke in their presentations. Humanity has made enormous progress, including in the scientific realm, through the specialization and division of labor, and these divisions are now reified in the departmental structure of the university. And while the educational reform agenda is clear and compelling, the transdisciplinary research agenda still needs to be more fully explored and developed. I fear, for the many graduate students in attendance who hope to make Big History their career, that there will be few job opportunities within the Ivory â€œSilos.â€ We can predict that Big History will get bigger, but I am less certain what shape it will actually take. Two years hence we will have an opportunity to see how the field evolves, when the IBHA reconvenes for its next conference at Dominican University of California, August 6-10, 2014.