By Greg Soltis on November 6, 2009 in Essay, Intelligent Design and Its Critics

When you gotta go, you gotta go. In the men’s room after Michael Behe’s opening talk at a recent intelligent design symposium a fellow lad-in-waiting mocked, “There’s an evolutionary explanation for this,” referring to the dozen of us on a line that stretched to the exit. “As long as they don’t have to explain anything or give any details,” another instinctively quipped. Apparently, hype and hope rather than proof and truth account for the evolutionary paradigm’s parade down science’s Main Street.

To find out who’s in bed with this fact-lacking conspiracy, search no farther than your nearest neo-Darwinian. Citing decades-old remarks by Richard Dawkins, presenters and participants at this lecture series labeled evolution as ‘the weapon of atheism.’ If random processes churned out the accident known as humanity, then God the Divine Director and Cosmological Creator has officially left the building. Christianity—or at least their understanding of it—cannot be resurrected.

This was the consensus shared by the speakers and most listeners at “Evolution: The Untold Story,” a gathering of Catholic intelligent design and creationism proponents held October 24, 2009 at the Villanova Conference Center in Radnor, PA. 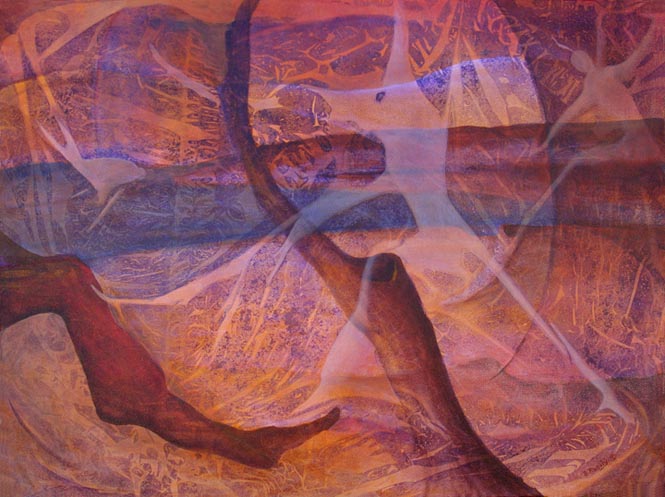 Scientists offered the first three lectures at this meeting organized by the International Institute for Culture, a Philadelphia-based nonprofit that aims to respond to the deceased pontiff John Paul II’s call for the “evangelization of culture.” Michael Behe, prominent promoter of ID and Lehigh University biologist, revved up the band by tooting his irreducible complexity horn and playing the mousetrap and flagellum tunes often heard from pro-intelligent design minstrels. Retired Cornell horticulturist John Sanford (the only non-Catholic presenter) then entered stage left. He asserted that humans devolve, with mathematical evidence from a computer program he helped develop called Mendel’s Accountant that simulates population genetics. Sanford also claimed that genetic deterioration explains, among other things, why our biblical ancestors lived for centuries but our children will be lucky if they reach the century mark. And retired chemist Hugh Miller, who used radio-carbon dating to study fossilized bones, contended that dinosaurs are 2000 times younger than what evolutionists estimate. He regarded the concept that humans evolved from ‘Ida’ and ‘Ardi’, whose fossilized remains were introduced in 2009, as “wishful speculation.” These three speakers previewed what may be addressed at the upcoming conference, “The Scientific Impossibility of Evolution,” at Rome’s St. Pius V University on November 9, 2009.

With these presentations prompting more than the token “Wow!” from the audience of 100 concerned Catholics, most in attendance agreed with Hugh Owen, director of the Kolbe Center for the Study of Creation, who predicted that evolution will devolve into “one of the great jokes in this history book.” But he may not have the last laugh.

Gearing up for this Year of Darwin (2009 is the bi-centennial year of Darwin’s birth and 150th anniversary of the first publication of Origin), the Roman Catholic Church’s Pontifical Academy of the Sciences sponsored a Plenary Session from October 31 to November 4, 2008, entitled ‘Scientific Insights into the Evolution of the Universe and of Life.’ In his summary of this four-day event, Nobel biochemist and lysosome discoverer Christian de Duve wrote, “Evolution is now supported by overwhelming molecular proofs and has acquired the status of established fact. In the words of His Holiness John Paul II, ‘it is more than a hypothesis.’” And the Carnegie Institution’s Maxine Singer recognized ID’s dire attempt to cover gaping holes in their notion of irreducible complexity with conceptual band-aids in her paper, The Latest Challenge to Evolution: Intelligent Design. No scientist attending this plenary session a year ago defended intelligent design.

Feeling like victims of an un-natural selection, ID and creationism advocates organized their own conferences—most in Europe. One frustrated individual at the Radnor, PA event shared what he perceived as hypocrisy within the Catholic Church. “From the Catholic point of view, we have the Pope being advised primarily by atheists and evolutionists,” he said. “It would be like Hasidic Jews being advised by Islamic terrorists.”

But a handful of listeners voiced a different frustration as the day’s events drew to a close. They had hoped to learn more about how Catholicism and evolution might be compatible—an un-tellable story for most in attendance. As another man observed in the final discussion, “Our understanding of creation isn’t ‘Boom! I’m an artist. I made something today.’ It’s a continuous thing.” When the discussion moderator asked this man if he thought that Church teaching should evolve and is evolving, this man astutely rejected the moderator’s bait by recognizing that what’s up for debate is not Church teaching but Catholics’ understanding of it.

According to St. Thomas Aquinas and the Catholic intellectual tradition, faith should not trump reason but the two should co-exist. Aquinas said that it is just as rational to claim that the world has existed for all eternity as it is to claim that the world was created at a specific moment (i.e., the beginning of time). Christians, like Aquinas, subscribe to the latter. They know through revelation that creation exists, that it somehow leads to humans, and that humans are created to love.

The sciences can shed light on how this creation takes place. Accounting for what science reveals to theology, Steven Pope, a Catholic Aquinas expert from Boston College who did not speak at this Radnor symposium, said without hesitation that, “Evolution is God’s way of creating.”

As sensed by the astute man in the final discussion, the main point of creation is not that nothing exists and then suddenly—Bam!—something exists. Instead, creation emphasizes the created’s dependence on the Creator. Without God, nothing exists.

The God of an evolutionary atheist “suffers from an extreme case of attention deficit disorder,” as diagnosed by Edward Furton from the National Catholic Bioethics Center in Philadelphia, PA. But for the twentieth-century Jesuit theologian Bernard Lonergan, God doesn’t give up custody of creation but is the Custodian of Creation. God creates through an ongoing process that Lonergan says is “the maintenance in being of all that ever was and ever will be.” According Lonergan’s concept of ‘emergent probability,’ simpler cycles set conditions for the emergence of more complex cycles (the ‘emergent’ aspect). And these conditions arise in a rather random and non-systematic manner (the ‘probability’ aspect). As complex patterns emerge, these and other complicated patterns will become more common. So randomness is not an absolute but a relative condition. From an evolutionary angle, as nervous systems develop, the brain is more apt to intelligently react. And from Lonergan’s Catholic perspective, God uses emergent probability to create the world.

Pope and Lonergan echo the following quote from the Statement by the Pontifical Academy of Sciences on Current Scientific Knowledge on Cosmic Evolution and Biological Evolution that was published in the proceedings from the 2008 plenary session: “One could see in these evolutionary processes a confirmation of the theological concept of creatio continua (creatio and conservatio) which states that creation is a permanent process of participation of being by the Being by essence, who deserves our respect and our praise.”

But the Catholic understanding of how human beings came on the scene shouldn’t send them tumbling from atop the pinnacle of creation, as Furton recognized. This editor of The National Catholic Bioethics Quarterly contended in the day’s final talk that relegating humans to sophisticated animals with no distinctive resemblance to God saps the great calling of the Christian moral life. “The teaching that we ought to treat others as we would like to be treated,” Furton said, “is incompatible with a philosophy of the survival of fittest.”

Furton’s warning, however, is incompatible according to the moral theologian Steve Pope for two reasons. First, Darwinian evolution and subsequent theories developed in light of Darwin should not be morphed with social and moral theories that are justified by a ‘survival of the fittest.’ And second, the Christian recipe for generosity is void of reciprocity. The Good Samaritan didn’t stop to care for a family member. He didn’t bandage the wounds of a fellow Samaritan. And he didn’t take this abandoned man to an inn and pay for his medical care just to return a favor. Typifying the magnitude of Christian love, the Good Samaritan loved his enemy. For Pope, what makes humans distinctive creatures with a resemblance to God and not just another chipmunk, chimp, or Chihuahua is “their capacity to be drawn by grace into a pattern of life that echoes the eternal inner self-giving mutuality of God’s own Trinitarian love.”

As Catholic theologians such as Pope and Lonergan tap into the richness of their Church’s tradition and scientists continue to provide evidence supporting evolution, it appears that the last laugh will not be by Kolbe Center director Hugh Owen. Misreading the writing on the wall for evolution’s demise, he predicted that “Posterity will marvel that so very flimsy and so dubious a hypothesis could have been accepted.” What else can be said about claims such as Owen’s other than when they gotta go, they gotta go.