The Evolution of Personality

The Evolution of Personality
January 19, 2012

The Evolution of Personality 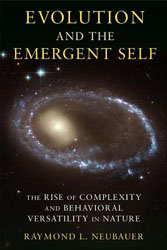 In my book, Evolution and the Emergent Self, I examine four animal groups with high relative brain size (high brain weight in comparison to body weight), and find that they have a variety of qualities in common even though they have very different evolutionary histories and live in different environments: chimpanzees, dolphins, corvids (mainly ravens and crows), and elephants. There is a remarkable convergence of behavior: They all have long-term relationships and complex societies with “politics” in which two or more individuals may form alliances against others. They appear to consider what others are thinking and can form flexible plans of deception. Hunting can involve different roles for different members that are coordinated with each other. They have complex communication with the possibility of understanding syntax in learned instructions.

Each of these species has a long period of juvenile dependency that allows for a slowly maturing nervous system that is capable of flexibility and innovation into the adult years. The variability of learning creates individual differences between members of a species and local cultural differences between groups. There is insight learning that finds quick solutions to novel problems faster than we would expect from trial and error alone.

At one level, we can simply say a more complex nervous system leads to more complex behavior. But I go further and suggest that there is an emergent self that seeks to express itself in more complex communication and social relationships, and values others of its kind more fully as individuals than do species with smaller relative brain size. We see this in long-term relationships, in what looks like mourning at the death of a conspecific, in helping behavior toward non-relatives, and in forming higher order coalitions in society. Evidence of mirror self-recognition in all four groups fits this picture of an emergent self that views itself and others with greater objectivity.

This emergent self also expresses itself in intricate manipulation of its environment. Each species has high dexterity, but the appendage employed varies widely due to their different evolutionary origins, from a hand to a beak, a trunk, or a flipper. What is constant is a large brain that is expressing itself.

This large brain also appears capable of abstraction. Each of these species is skilled at mimicry, and it could be argued that this involves a concept of the other that serves as a model. It suggests that there is a mental representation of some part of the model, such as its voice or movements, that the individual is trying to match. There also appear to be mental representations in tool making. The termite fishing sticks of chimpanzees and the leaf tools of the New Caledonian crows are made to standardized sizes that suggest preset concepts of length and width. They may then be carried long distances where they are just the right dimensions for the task at hand. This suggests a mental representation of both tool form and the goal of its use.

An emergent self sees with greater objectivity, and it can mix and match categories with high flexibility. It can combine tools in novel ways and formulate new alliances in social life. It seems to view itself with greater objectivity, as evidenced by mirror self-recognition. I suggest a physical basis for this greater objectivity in the hierarchical arrangement of circuits in a large brain. We now know that the brain is modular, with specific areas devoted to specific functions like facial recognition or short-term memory. Animals with high brain-body ratios have more modules that can be devoted to functions beyond just physiological control. A hierarchical arrangement of these modules may lead to higher derivatives from the raw data, resulting in higher levels of objectivity.

Brains as well as genes can store information, and I suggest information content may be the defining quality that distinguishes two paradigm strategies of life. Organisms of high information content in genes or brains take longer to develop for the basic reason that complex things take longer to build than simple things. They have versatility of response built into the individual and can deal with a variety of fluctuations in the environment. They have many of the characteristics of species known in ecology as K- selected: small litters with slow development of the young, allowing a long period for learning, and fairly steady population numbers since individuals have a variety of skills to cope with change.

Organisms of lower information content in genes or brains tend to develop more quickly and are known in ecology as r-selected, opportunistic species. There is less parental investment per individual, but more are produced. They have shorter, less flexible programs, and many individuals may be sacrificed to find the combinations best suited to match new conditions. These individuals can quickly take over an environment so that populations go through characteristic â€œboom and bustâ€ cycles.

Humans rely on an extreme form of a strategy found repeatedly in natureâ€”the accumulation of information to increase the versatility of response to a changing environment. Programs are encoded not only in genes and brains, but in languages, books, and computers. Our current dominance on the planet, both for good and for ill, testifies to the power of information for mastery over nature. In this sense, human culture is not an anomaly, but an extension of K-selected strategies found repeatedly in nature. It might even be suggested that a species like us is inevitable if the evolutionary process is given enough time to run. All of nature is not laboring toward greater complexity because short programs with quick development are an alternative way of dealing with change. But it may not be too far-fetched to suggest that given the right conditions and enough time, a species like us is in the cards, and the seeds of consciousness are planted within the evolutionary process.

Adapted from Evolution and the Emergent Self by Raymond L. Neubauer. Copyright (c) 2012 Columbia University Press. All rights reserved.