The Queen of the Sciences

The Queen of the Sciences

Our medieval ancestors understood theology to be the queen of the sciences. Her twin sister Sophia—the Greek word for “wisdom”—was also venerated in the discipline of philosophy. It was hard to tell the two beauties apart, but together they once ruled the many domains of human knowledge.

Theology departments today, however, are increasingly irrelevant backwaters in the modern university, engaged in seemingly solipsistic debates. If they want to reclaim exalted status in the university and society, they would do well to embrace Big History as the primary “revelation” and the Great Matrix of Being as foundational knowledge.

The Great Matrix of Being, as I put forth in my last essay, is a multi-dimensional scientific understanding of reality measured in universal scales of chronology, size, energy density flow, electromagnetic radiation, and thresholds of emergent complexity. This was contrasted with the now antiquated “Great Chain of Being” employed by medieval Muslims, Jews, and Christians.

Big History traces thresholds of emergent complexity in the evolutionary narrative from the Big Bang to the 21st century to create a pedagogically powerful narrative that enhances understanding, retention, excitement, and relevance, all badly needed in today’s classrooms and society. The “revelation” of Big History, however, is not the result of one inspired mystic or of a committee of priests and scribes redacting archaic scriptures in the past. Instead, it is the result of millions of scientists, engineers, historians, archeologists, psychologists, philologists, and others, who have worked diligently in diverse disciplines to discover the details of the really real over many generations in a progressive and self-transcending learning process.

It is important, however, to distinguish between four different kinds of emergent complexity in the new epic narrative of evolution:

1) Evolutionary Emergence: The grand arc of Big History is the story of the universe, Earth, and humanity. In the beginning, there were no stars, no galaxies, no periodic table of elements, no planets, no water, no complex chemistry, no life, and no intelligence. These emerged in a sequence—thresholds of emergent complexity—over a timescale measured in billions and millions of years.

2) Developmental Emergence: Each of us begins our journey as a single cell in our mother’s womb. Over nine months, that cell replicates and differentiates into the 215 tissue types of our bodies. The development continues through childhood, into adult bodies composed of 1013 cells. In this example, developmental emergence occurs in a timescale measured in months, years, and decades.

3) Functional Emergence: Protons, neutrons, and electrons form atoms; atoms join together to form molecules; molecules attach to form more complex chemistry. The inner life of a cell is a dense and intense collection of millions of molecular machines undergoing trillions of mind-boggling chemical cascades per second. The atoms and the molecules are not alive, but when functioning together, they can form a living cell, organ, and organism. Functional emergence in our bodies occurs in a timescale measured in nanoseconds and hours.

4) Intelligence Emergence: With the advent of symbolic language and collective learning, we see the accelerating emergence of intelligence in humans. Science, technology, engineering, math, and medicine are the most obvious examples, as new insights and discoveries are built upon the successes of the past in a progressive and self-transcending learning process. This kind of emergence also occurs in the arts and humanities. The emergence of intelligence is a complex distributed phenomenon and is evolutionary (over the course of human history), developmental (over the course of an individual’s lifetime), and functional (necessary for the workings of increasingly complex societies).

While evolutionary emergence is the grand narrative of Big History, coming to recognize and understand developmental emergence, functional emergence, and intelligence emergence is no less important. To truly appreciate Big History, we must not only count in billions of light-years, but also the amazing nanoscale functions and developments manifested by quadrillions of atoms dancing in and out of our bodies. We must also appreciate the history of knowledge, creativity, and discovery that characterizes the recent, dramatic, and accelerating successes of our species.

With these different concepts of emergence in hand, we can now begin to understand how the academic disciplines and departments of the modern university map onto the structure of the universe itself. From the bottom up, we begin with fundamental theory, particle physics, nuclear physics, atomic physics, and chemistry. The disciplines then split into inanimate and animate tracks. Inanimate matter goes from physical chemistry to material sciences, earth sciences, space sciences, astronomy, and cosmology. Cosmology, it should be noted, also takes us back to fundamental theory and particle physics, so the top and bottom are connected in the disciplines of physics and astronomy.

Mathematics is a special tool used in multiple disciplines and domains throughout the Great Matrix to great effect. Mathematics makes a more credible claim to royalty in this academic Game of Thrones, more so than the aging, decrepit, and inward-looking neo-orthodox Theology.

When we follow the animate track through the emergence of life, we go from biochemistry to cell biology, physiology, ethology, ecology, and a long list of human sciences (psychology, sociology, anthropology, medicine, history, economics, and politics). The humanistic disciplines belong to intelligence emergence because 1) they would not exist without biologically empowered humans creating art and literature, politics and philosophy; and 2) they accumulate and evolve in canons of creativity and techniques that influence our ongoing creations.

The animate and inanimate, however, are not so neatly segregated as one might think in this guide for the perplexed to the modern university. Bacteria transform the geology of the Earth, even as geology contains and constrains the evolution of life. Humans today literally move mountains, drain rivers, clear forests, and change the atmosphere. We are also a geological force acting to transform the planet and ourselves.

Science often succeeds in reducing complexity from one level to an adjacent lower level—for instance, from cell biology to biochemistry—but it would be silly to think that all the academic disciplines could be reduced to particle physics (as some physicists claim). Particle physics is a necessary condition, but insufficient explanation of cell biology or human psychology. The whole is more than the sum of its parts, and emergence is real. That is why we need universities with many different disciplines and departments. And that is why we need Big History as a guide to faculty and students alike who are confronted and confused by an exponential growth in specialized knowledge and esoteric college course catalogues.

Theology and philosophy today, it is hard to tell the sisters apart sometimes, could reclaim their throne as the queen of the sciences, but only if the philosophers and theologians first acquire a broad historical foundation and general science literacy. I should think this necessity to learn and teach Big History would be a religious obligation for any serious theist.

The ancient and modern texts can be re-read and re-interpreted in light of Big History and the Matrix. These texts are certainly profound, but they are not true in the way that science and history are true. That is a tall order given how far down the road of specialization and division of labor we have all traveled, but it is also an awesome opportunity to put the universe and the universal back at the center of the university. Then we might loudly proclaim in unison:

The queen is dead! Long live the queen! 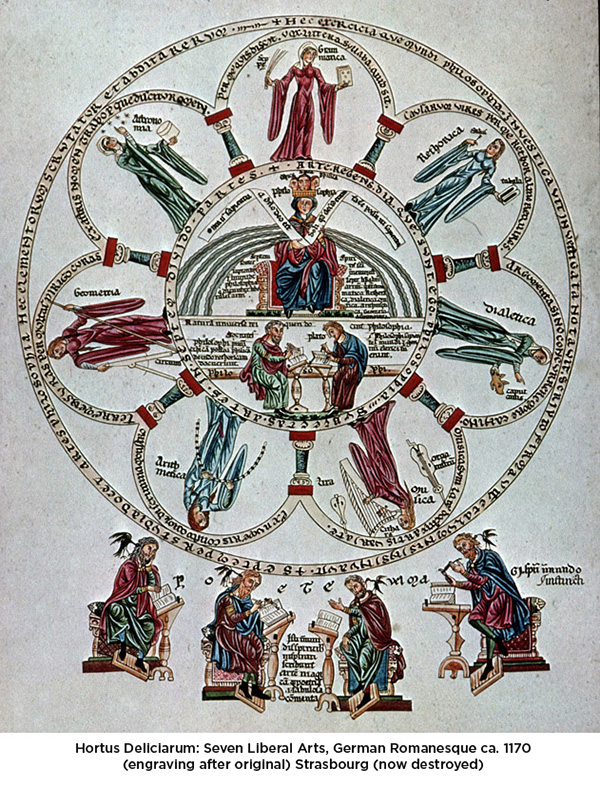