Review of Science and Religion in Schools

Review of Science and Religion in Schools
March 6, 2008

Review of Science and Religion in Schools 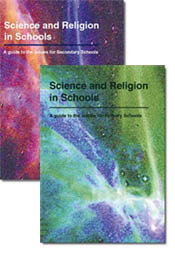 There is no shortage of books on science and religion but, perhaps surprisingly, there is a paucity of materials that are of high quality and can be used in schools. Until the Science and Religion in Schools Project, that is. This initiative, supported by a grant from the John Templeton Foundation, has painstakingly produced these exceptionally good resources, one for teachers working in primary schools (with 5 to 11 year olds); the other for teachers working in secondary schools (with 11-19 year olds).

Given that list, it is not surprising the materials, for both the primary and the secondary schools, are rigorous and balanced. What is particularly encouraging for any teacher is that, in addition, they are easy-to-read and, without being intended to be used as a set of lesson-by-lesson worksheets without any thought or choice, are eminently practicable.

Each book is accompanied by a CD-ROM that contains a very large amount of teaching and learning material, including excellent lesson plans, PowerPoints, and video clips. To give you a flavour there are extensive samples at www.srsp.net.

The primary book usefully discusses the notice of a ‘community of enquiry’ as a “safe structure or medium through which pupils may explore ideas of knowledge, meaning and purpose and moral dimensions of thought and action” and goes on to explore the importance of such practices as taking turns and listening respectfully. To give just a flavour of the resources, the unit ‘Are you an alien?’ explores the relationship between environmental ethics and the science and religion issue. It considers some of the possible future consequences of human space exploration into other life-forms and their environments. It explores our reasons for doing investigative science using living things, and compares ideas in Buddhism with living systems theory.

An indication of the coverage of the secondary book is provided by listing some of the topics it covers for the 11-16 age range: How does science make sense of the world?; How does religion make sense of the world?; A Buddhist perception of science and religion [with analogous topics on Christianity, Hinduism, Islam, Judaism and Sikhism]; What is an explanation?; Scientism and Materialism; Language in science and religion; Darwinism; What can science tell us about the beginning?; What can religion tell us about the beginning?; Literal or Literary?; Environmental issues; Genetic Issues; Medical issues; Animal rights; Terraforming [practical resources not included!].