So the Christian Said to the Atheist…

So the Christian Said to the Atheist… 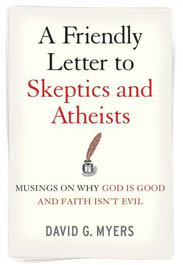 A Review of David G. Myers, A Friendly Letter to Skeptics and Atheists: Musings on Why God is Good and Faith Isn’t Evil, Jossey-Bass/Wiley, 2008.

Maybe, just maybe, we have broken the logjam.  Last year The Global Spiral reviewed a book in which a pastor and an atheist joined forces to spread a message of “evolutionary” Christianity.  Their collaboration resulted from a connection of a different type: the two, Michael Dowd and Connie Barlow, had recently married.

Now comes another book in the same spirit.  David Myers, a Christian psychologist at Hope College, invites conversation and connection in a little volume called A Friendly Letter to Skeptics and Atheists.  It’s ostensibly a response to Sam Harris’s Letter to a Christian Nation and other “culture war” books of that type, but it accords more with the Sermon on the Mount than any Christian response so far.

Myers is a social scientist who has written the world’s best-selling text in psychology.  (All revenue is given away through a foundation of his.)  The meaning of science in that field—it’s mine as well—is problematic at best, but Myers makes a strong case for scientific psychology.  In the manner of skeptic Michael Shermer, and occasionally drawing on his work, he questions entrenched beliefs.  He challenges students to think critically and, above all, demand evidence.

A Friendly Letter is meant to show that a Christian can do precisely that.  “Get the beam out of your own eye,” Jesus taught, and Myers begins with a mea culpa.  “If we have abetted poverty, injustice, climate change, genocide, or pointless war, then for shame.  If we have fostered superstition or tolerated prejudice (as I will suggest we have) then show us our error.”  I confess, says Myers: we Christians have indeed been hypocritical, stupid, proud, and blind to evidence.  “We are guilty.”

A member of the Reformed Church in America and a conservative on many fronts, Myers believes that everything must be subject to the test of “coming true.”  As Moses said, “If a prophet speaks in the name of the Lord and what he says does not come true, then it is not the Lord’s message.”  Data, then, are God’s words.  Let the chips fall where they may.

And the chips fall on many issues in the culture wars.  Gay marriage?  (1) The evidence mounts that sexual orientation is a matter of nature, not choice; it’s a biological disposition that is well in place by birth.  (2)  The evidence is clear and consistent that enduring marriages make for happiness, the health of children, and the integration of societies.  (3) The Bible contains 31,103 verses, over 2100 of which mention poverty and only 7 of which speak of same-sex behavior.  Of those 7, none are the words of Jesus and none address enduring same-sex partnerships.

So, we say to our fellow people of faith:  Should we not put on our social radar screens the concerns that Jesus had on his?  What would Jesus do?  . . . Rather than advocating a sexual double standard for straight people (marry or be celibate) and gay people (sorry, you must be celibate), why not proclaim a single Christian sexual ethic?  Why not yoke sex with faithfulness?  Why not seal love with commitment?

Christians distressed by that conclusion just might pray for Myers—except for the last ten years of research on “intercessory” prayer.  It has uncovered no “God effect” on healing: in a variety of settings, patients who were prayed for fared no better than patients who weren’t.  (A study involving in vitro fertilization appeared to be an exception until two of its authors were found to be involved in fraud.)  The negative results did not surprise Myers, who had predicted them in a notarized document before any of the research began.  In fact, he says, a positive outcome would have conflicted with his Christian view of God.  “The Lord’s Prayer, the model prayer for Christians that I pray daily, does not attempt to control a God who withholds care unless cajoled.”

If data like these make Christians squirm, there are irritants for the other side too.  Take Christopher Hitchens’ dictum that religion “poisons everything.”  No way, says Myers, or so “I would gently suggest to my skeptic friends.”  Numerous studies report that religious devotion is (1) positively associated with forgiveness, gratitude, compassion, volunteerism, charitable giving, as well as physical and emotional health.  They also report that such devotion is (2) negatively correlated with crime and delinquency.  That’s hardly the work of a poison.

Myers goes on to ask his skeptic friends a surprising question: why is skepticism “a guy thing”?  His evidence: (1) The ten winners and fourteen runners up on the Skeptical Inquirer list of outstanding 20th century rationalist skeptics are all white males.   (2) In the “science and the paranormal” section of the 2007 Prometheus Books catalog (it’s the leading publisher of skeptical thought), there are 94 male authors and only 4 female.  (3)  Many studies report that men pray less than women and attend fewer church services.  The same is true of whites in comparison with blacks.  So the chips fall: “Aggressive antireligious skepticism is predominantly a product of Euro-American White males, who often are expressing contempt for the beliefs of people quite different from themselves.”

This, from one who “cherishes” skepticism and “cold” rationalism.  The catch is that Myers also recognizes multiple forms of intelligence.  Non-rational ways of knowing matter too, he says, and they are more prevalent among women.  Research is showing that if you lose the emotional connection to thought, you lose judgment.

Myers’ approach is actually quite simple.  You test, you take the results as the word of God, you move.  “If [ideas] survive, so much the better for them.  If they crash against a wall of evidence, so much the worse for them.”  Surprisingly, religion is not the enemy of his approach but rather its source.  He describes his own tradition as “Reformed and ever reforming,” holding that “all truth is God’s truth.”

I myself do not believe that empiricism can reach as far as Myers would like.  I worry, for example, about the extent to which experimenting on prayer changes its very nature.  Hold a snowflake in your fingers to get a closer look–it melts away.  There is also the matter of neuroscience and the soul.  Myers suggests that evidence from this field refutes dualism, the idea that the soul is separate from the body.  But the evidence, as opposed to the philosophy, decides nothing; it can support either a dualism or a monism (where body and soul are one).  Myers is more solid when he grounds his monism not in neuroscience but in the Biblical understanding of soul (the Hebrew nephesh), noting that a “Christian” dualism had its origins in Plato.

But empiricism can still go a long way, and it’s the bridge that Myers offers to his skeptical and atheist friends.  Behind the offer is a welcome recognition that they are not of a single type, any more than Christians are.  And so he says to those who would hear, let’s meet in the middle, let’s look at the evidence, and mea culpa if it reflects badly on my end.

I’m anxious to see who’ll respond to this invitation.  These days it seems to be fundamentalist versus fundamentalist, two sides locking horns, unable to unlock.  But with new players on the bridge, anything can happen.  Some will complain, “It isn’t Christianity” and some, “It isn’t atheism.”  One thing is certain: there will be movement.