Big History is the 13.7 billion year epic narrative of cosmic, planetary, life, and cultural evolution. It is not only scientifically profound. It can be told as a sacred story in ways that bridge mainstream science and diverse religious traditions. When skillfully told, it makes the science memorable and meaningful, even while enriching one’s religious faith (or secular outlook).

In the early through mid twentieth century, the Jesuit paleontologist Pierre Teilhard de Chardin promulgated a Christian version of the story, while Julian Huxley (biologist), Aldo Leopold (ecologist), and Loren Eiseley (anthropologist) wrote eloquent tomes from what could be called a “religious naturalist” perspective. But it wasn’t until the 1970s and 1980s that the intellectual and literary expressions began to be celebrated in ceremony and rituals in what was called the “Epic of Evolution.”

The first ritual expressions were associated with the Deep Ecology work practiced and promoted by Joanna Macy (California) and John Seed (Australia). Although “The Council of All Beings” is the most familiar of their productions, Macy and Seed (as well as Jean Houston, New York) created solemn processes and guided meditations that helped participants connect with their primate, reptilian, and fish heritage.

In the early 1980s, Sister Miriam Terese MacGillis of New Jersey, a student of Thomas Berry who founded Genesis Farm, created “the cosmic walk,” which has become perhaps the most common way in which the Epic of Evolution is celebrated in ritual format. A rope or pathway is laid out in a spiral on the ground, with stations representing major evolutionary events, scaled (arithmetically or geometrically) to actual time of occurrence. Thus 14 billion years of evolution is represented along the length of the spiral. Those who take the walk begin their journey at the center of the spiral, at the birth of the known universe, and then advance toward the present as they walk the spiral outward. Scientists refer to this beginning as the Big Bang, but Epic practitioners prefer more sacred terms, such as “Great Radiance” (a term from Philemon Sturges) or “Primordial Flaring Forth” (drawing from Brian Swimme and Thomas Berry). Variations of MacGillis’s initial walk are still in use, as well as completely new texts, though still using the spiral format. Many examples of such ritualizing are available on the internet, which is a good place to track the evolution of such spirituality and ritual processes. Catholic retreat centers are increasingly building permanent outdoor cosmic walks on their grounds.

In his book, The Hidden Heart of the Cosmos, cosmologist Brian Swimme selects several components of the Epic of Evolution and offers practices for bodily awareness of these: (1) how to experience the Earth turning rather than the sun “setting”; (2) how to experience the center of the Milky Way Galaxy. To experience Earth turning, Swimme suggests going out at sunset and envisioning oneself “standing on the back of something like a cosmic whale, one that is slowly rotating its great bulk on the surface of an unseen ocean” (p. 27). To experience the center of our galaxy, Swimme invites us to lie on our backs under the night sky, to gaze at the constellation Sagittarius (which aligns with the center of the galaxy), and then to imagine the stars not as “up” but “down.” Earth’s gravity is the only thing that holds the viewer from falling “down” into the gravitational attraction at the center of the Milky Way. “You hover in space, gazing down into the vault of the stars, suspended there in your bond with Earth” (p. 52). 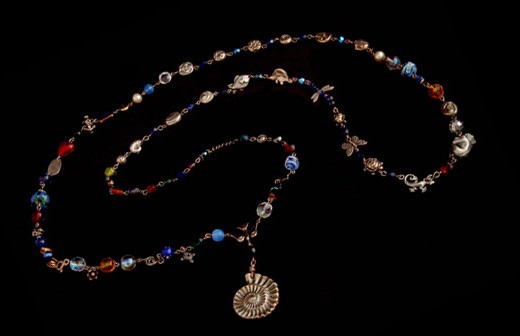 Around the turn of the millennium, several people in the United States independently originated a way to experience the Epic of Evolution in a new and very personal way: through the stringing of beads into “Great Story Beads,” “Universe Story beads,” or a “Cosmic Rosary.” Beads are purchased (or made from sculpey clay) and strung in a loop to signify major moments of transformation (“grace moments”) in the long journey of evolution. Unlike the public “Cosmic Walk”, these loops or necklaces of beads enable individuals to personalize the story: choosing which events are most meaningful to them, and including significant events in their own life story as beads in the loop as well. Instructions for creating Great Story Beads, including a suggested timeline, are available online to facilitate this process.

Seasonal celebrations are yet to develop for the Epic of Evolution.* The creation of the chemical elements (carbon, oxygen, iron, gold, etc.) inside of stars that lived and died before our sun swirled into existence is beginning to be celebrated at the winter solstice. But it is such an alluring aspect of the epic that it is celebrated also throughout the year. In a sort of “Cosmic Communion” (which has been performed at Sunday services of Unitarian Universalist churches), participants are anointed with “stardust” (glitter) to signify, as Carl Sagan pointed out in the 1980s, that we are quite literally “made of stardust.” Connie Barlow and Michael Dowd (whose “The Great Story” website details the stardust ritual) have brought the Cosmic Communion into Unitarian churches and spiritual retreat centers, along with an experiential process to “celebrate your cosmic age.” Barlow also emphasizes how one can see the constellation Orion in a new way: the Red Giant star Betelgeuse, in Orion’s right arm, is fusing helium into carbon, oxygen, and nitrogen right now (all are elements that we breathe in and out). The blue-white star Rigel (in Orion’s left leg) is fusing carbon and helium into silicon, calcium, potassium, and will one day forge silver and gold when it expires in a brilliant supernova explosion.

Other forms of Epic Ritual, still evolving, are designed to keep the memory alive, and thus honor, extinct organisms — from dinosaurs to passenger pigeons. One example is the “Coming Home to North America” ritual, designed by Connie Barlow (and now available over the internet), which leads participants through a playful and reverential re-enactment of the comings and goings of plants and animals in North America for the last 65 million years, since the extinction of the dinosaurs. In it, participants learn that camels and horses originated in North America 50 million years ago, and were isolated on this continent until spreading into Asia and Africa just 3 to 5 million years ago, and then going extinct in their land of origin just 13,000 years ago.

In 2001, epic enthusiasts began writing “evolutionary parables” for teaching values congruent with ecological/evolutionary awareness. In these, a major moment of transformation (such as vertebrates venturing onto land) is rendered into an engaging story and scripts for acting out. Although ancestral creatures may be depicted in dialogue, and thus anthropomorphized, the science underlying the narratives is accurate and up-to-date. Because the Epic of Evolution is “the story of the changing story,” as new advances occur in the sciences, these parables, rituals, and other experiential forms will necessarily evolve.

*Seasonal celebrations based on the Epic of Evolution are now available.  See “Deep Time Map” by Jon Cleland Host in the files section of the Naturalistic Paganism yahoo group.

This article first appeared online at TheGreatStory.org. Epic of Evolution Ritual, by Connie Barlow, for the 2004 Encyclopedia of Religion and Nature, edited by Bron Taylor (used with permission)