NSoR 2: The Old Sciences of Religion

NSoR 2: The Old Sciences of Religion

By William Grassie on October 8, 2011 in Essay, The New Sciences of Religion

An excerpt from Chapter 2 of The New Sciences of Religion: Exploring Spirituality from the Outside In and Bottom Up (Palgrave Macmillan, 2010) Pages 42 – 44. 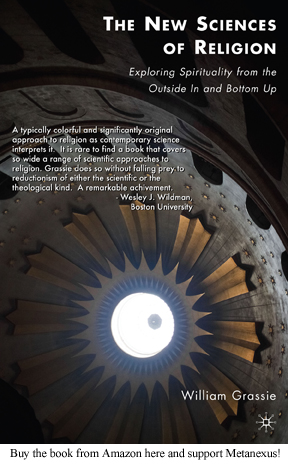 Early social theorists on religion all used some version of Marx’s base-superstructure model of causation, though they may not have used the exact terms. Some natural or material factor that determines the beliefs and behaviors of individuals — economics for Marx, the human psyche for Freud, society for Durkheim — is foundational. Religion is created and determined by other forces; it is not itself a cause. When the foundation changes, so too changes what is built on top — in this case, religion. The early Freud was more optimistic about the Enlightenment project. He believed that if we could understand the origins of religion in human history, we might better take control over it; hence his book Totems and Taboos (1918). Without necessarily crediting Comte, all adopted a progressive view of increased secularization as a good that resulted from economic and scientific development. The later Freud was less optimistic. He had lived through World War I and saw the clouds of another great conflict building at the end of his life in exile from Austria because of the Nazis. He did not really think that the foundation, the human psyche, to be all that mutable. So Freud leaves us simply stuck with the dilemma described in his book Civilization and Its Discontents (1930) and its dark premonition about the violent chaos about to be unleashed in Enlightenment Europe.30

The German sociologist Max Weber wrote The Protestant Ethic and the Spirit of Capitalism (1905) partly as a rebuttal to Marx. The point was to reverse Marx’s causal relationship between base and superstructure, to take religion out of the realm of the superstructure and put it into that of the foundation as a driver of economic change. Weber argued that the values of worldly asceticism, independence, and self-discipline nurtured by Protestant Christianity, particularly Calvinism, played a central, albeit unintended, role in the development of European capitalism. He contrasted this with the influence of Catholicism. In other writings, Weber argued that the religions of China, India, and the Muslim world were antithetical to the rationalities and sensibilities of modern capitalism.31

Today, most social theorists would reject the base-superstructure model as too simplistic, although there remains a natural tendency toward the self-importance ascribed to one’s own pet theory. It is not clear anymore what is foundational and what is the causally dependent variable since everything reciprocally affects everything else. Religions, like humans, are complex and dynamic.

Today, most informed social theorists are also forced to reject secularization theory. Religions are on the rise throughout the world, in spite of dramatic economic growth and scientific advance. It is hard to deny the fact, even if one wishes it were not so.

The Anathema of the University

What is important to note at this stage of our discussion is that the social sciences — psychology, sociology, and anthropology — were largely founded by thinkers who took for granted that there was no truth content or value to religions, that religions were irrational, superstitious, regressive, and dysfunctional. They all bought into Comte’s vision that the natural trajectory of human civilization was toward secularization and away from religion. As societies became more economically and scientifically developed, they would forsake these “childish” beliefs and adopt scientific attitudes and worldviews. To use psychological terminology, the social sciences were founded with a lot of animus toward religion, so it is little wonder that the faith factor is the forgotten variable in much of the social sciences in the decades that followed, as these sciences and their respective guilds within the university developed, expanded, and evolved.

It is not an overstatement to say that the modern research universities were founded with an explicit agenda of getting rid of religion. Andrew Dickson White, the founding president of Cornell University, expressed this sentiment in his 1896 book A History of the Warfare of Science with Theology in Christendom.32 The religious virtue of spiritual enlightenment was turned upside down by the Enlightenment. Perhaps we can laugh about this as a backhanded proof of Freud’s Oedipal complex. In this case, the “father to be killed” was the religious institution that created the modern university in the first place, that is, the medieval church and its Protestant offspring. Freud met a similar fate as the “father of psychology” and is largely denied and displaced within his own guild.

In any case, there is a lot of ideological and emotional baggage here. Science, most would agree, needs to be first descriptive, not prescriptive. Because of the ideological baggage of scientism, disciplines such as sociology, psychology, and anthropology have largely not developed an adequate descriptive phenomenology of religion and spirituality. Instead, the founders of these disciplines and their intellectual descendants have dismissively sought to put religion neatly into an intellectual box, a single, simplistic paradigm by which it could be dismissed.

30. Freud, Totem and Taboo; Freud, Civilization and Its Discontents.

32. Andrew Dickson White, A History of the Warfare of Science with Theology in Christendom (Project Gutenberg, 1896).